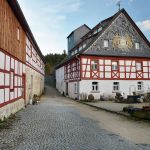 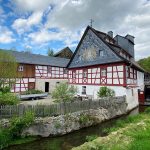 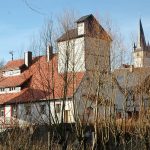 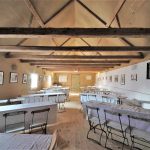 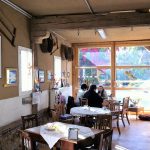 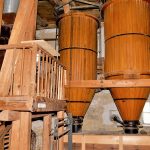 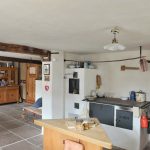 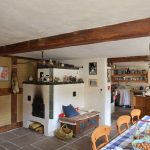 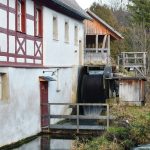 Reminiscent of the old miller’s craft

What onlooker’s heart wouldn’t swell when they see the Wonsees market mill in the Bavarian district of Kulmbach? The friendly, bright brickwork, the wooden beams painted in inviting red, the slate gabled roof. And on the front side, above the year 1730, the house emblem: two shimmering golden lions, which together hold a so-called crested wheel in their center. This is fundamental to the mill wheel’s drive and as a symbol is reminiscent of the traditional way in which rye and wheat were milled here from the 17th to the end of the 19th century. Then came the sale of the market mill, and the new owners, the Schoberth family, modernized the mill technology with a flow turbine, used until 1939.

Today, the mill no longer grinds grain – however, the most recent owner can imagine this changing in the future. The mill equipment typical for the 1920s has been completely preserved: On the four floors of the mill tower, covered with Thuringian slate shingles, the historical technology of the grinding mill is wonderfully visible, in the form of three roller mills, plansifter, conveyor and screening systems, a brushing and peeling machine, grinding stones, grain silos, a wooden elevator and the transmission. In addition, the mill once again has been outfitted with a classic mill water wheel. After being vacant for more than a quarter of a century, the Mätzold family bought the building in 2003 and renovated it with ecological materials in keeping with its status on the list of national historic places. This achievement was honored by the Hypo Foundation for Culture in 2009 with its prestigious first monument award.

The expertise of the builders did not come by chance, since Andreas Mätzold – in addition to his great passion for watermills – is the owner of a specialist company for the preservation of historical places, in Wonsees. He learned of the building after receiving a repair order for the house. And fell in love. By 2007, the carpenter and restorer had renovated the main building and the outbuilding was completed by 2009. As much as the Old Market Mill has a historical component, the interior of the west half, inhabited by Mätzold’s daughter Anja Soppa, is modern: The larch mill wheel generates electricity that powers all the devices in the cozy home, including wall heating. The granary has a pellet heating system.

As opposed to years past, there are not many villages in Upper Franconia today that still have an intact mill. The market mill is a popular photo stop for many hikers who pass by it on their tours: The architectural treasure is located on the Franconian Mountain Trail, which runs along 428 kilometers from the Franconian Forest in the north through the Fichtel Mountains and Franconian Switzerland to Nuremberg in the south, and offers fabulous landscape panoramas to nature lovers. In Wonsees itself, sights also await, including numerous breweries – typical of the region –, Zwernitz Castle and the rock garden Sanspareil. The market mill itself opens its doors every two years: on Whit Monday, framed by a festive program, it is open to visitors. Dates and further information are available from the German Society for Mill Lore and Preservation (DGM).

When it comes to professional and conservation-friendly renovation, expertise is just as much in demand as passion. The Old Market Mill – with quarry stone masonry on the first floor and a timber frame on the upper floor – was built in 1730. The core substance is said to be even older. Under the premise of preserving as much of the original as possible and proceeding in a strictly ecological manner, the building owner Andreas Mätzold had the timber frame filled with CLAYTEC Light clay block NF 1200 and the building exteriors protected from the weather with a coarse lime coating. For this, he commissioned the company Lehmbär. Owner Wolfgang Masching filled the ceilings with CLAYTEC dry earth fill material “GRANULAT”. Due to its heat-storing and sound-insulating properties, this is a particularly effective material for the roof. For optimal plaster adhesion in the interior, especially on the wooden beams, Masching used CLAYTEC Reed matting ST 70. On top of this, he applied CLAYTEC Clay undercoat and Clay topcoat plaster with straw and smoothed the walls with YOSIMA Clay designer plaster. A wall heating system is integrated into the undercoat. Clay earth is known as the most natural building material to create a cozy indoor climate. It absorbs heat and surplus moisture and releases them evenly back into its environment – perfect for the cozy Market Mill!