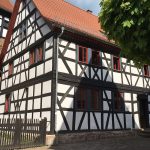 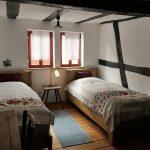 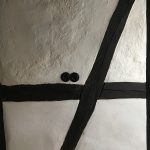 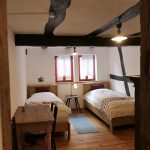 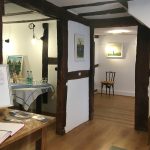 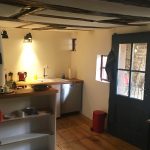 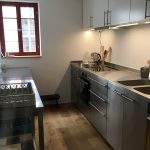 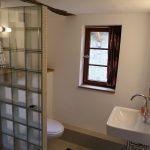 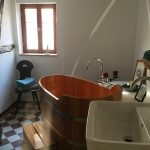 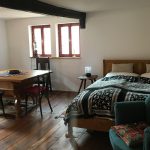 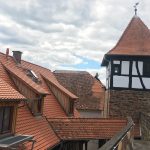 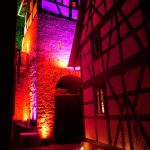 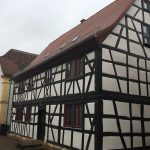 Lovingly renovated gem with many facets

It is not the only timber-framed house that embellishes the pretty „Mauerstraße” in the old town of Michelstadt in the Odenwald district of southern Hesse. But the Wehrmann House is special. Special in the many different ways it is used, in the way it is cared for, and for its atmosphere. The building, on the national register for historical preservation, was erected well over 400 years ago, its year of construction dates back to around 1590. At that time, according to tradition, it served among other things as a dormitory for the soldiers of the court official Johannes Eichelbrenner. After this, it housed a barber, a smith, then clothiers and a cobbler.

Today, the ethnologist Dr. Andus Emge and his partner reside under the pointed roof: In 2015, the property, previously owned by the municipality, was transferred to Emge’s private ownership. With expertise, passion and in compliance with regulations for the preservation of historical landmarks, he began an enthusiastic renovation of the property, which had last been refurbished in the 1970s. „Many compartments were still filled with aerated concrete blocks and clad with glass wool and plasterboard”, reports the house and building owner. He eliminated these „building sins”, revived the technology once used in the house with earthen clay blocks and clay plaster, and modernised it by incorporating an in-wall heating system integrated into the clay plaster. This, in turn, radiates cosy warmth both for the residents and for vacationers and overnight guests. On the upper floor, Emge and a team of craftsmen created a charming holiday apartment, true to the original with cosy wooden floorboards, selected authentic furnishings, two modern bathrooms with wooden bathtubs, and a shared kitchen. The two charming bedrooms can also be booked separately. The first floor with its catering kitchen and a romantic courtyard became a cultural space. Since 2019, exhibitions, lectures, bazaars and other events have been held there regularly, both publicly and by private booking.

Completed in 2018 after a two-year renovation period, the Wehrmann House – white facade, dark brown wooden framework, red roof shingles and window frames in blue – forms a charming ensemble with its courtyard of historical sandstone flagstones and the fortified turret on the city wall, accessible from the house, where guards still stood watch in the 16th century. The adjacent wooden battlement on the city wall and the city garden behind it contribute to the quaint impression as well. Also worth seeing are the neighbouring synagogue, the historical town hall and the more than 1,000-year-old Thieves‘ Tower in the picturesque old town of Michelstadt.

Scientific observations on the outer wall

Since July 2017, the Wehrmann House has also been a subject of research: Emge has been working on a cooperative project with the Institute for Materials in Construction at Darmstadt Technical University on „long-term hygrometric monitoring”: In a long-term study, the temperature and moisture in the inner, middle and outer layers of the exterior wall are to be documented. The influence of in-wall heating through water pipes in the plaster is also taken into account. For the measurements, custom probes have been developed. Subsequently, the measurements recorded every second will be evaluated in data diagrams.

Restoring the original construction methods of the old timber-framed house, which were capable of diffusion, was very important to the owner during the renovation of the Wehrmann House. To this end, he resorted to a variety of CLAYTEC products from the timber-frame restoration and earthen clay drybuilding systems. For the restoration of the interior walls, with the help of expert craftsmen, he used Lightweight Clay Blocks, Clay Masonry Mortar and Clay Undercoat Plaster with Straw. This suits particularly well as a support for a water-pipe in-wall heating system (4 cm), which Dr. Angus Emge had installed and insulated on the inside with CLAYTEC HFA maxi Wood fibreboards. The overlying layer is Clay Topcoat fine 06. The insulation boards were applied to the existing lime plaster. The framework behind the heating system is made of oak. The infills are partly made with solid brick, partly with clay block. The ample use of earthen clay products enhances the authentic appearance of the historical timber-framed house. In addition, the biological building material keeps the room temperature constant and the humidity at a uniform, healthy level through natural exchange. The heat is evenly distributed through the walls – an additional feel-good factor for owners and vacationing guests.

The Old Townhall in Stetten a.H.