The Church of Aignan 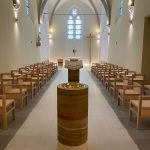 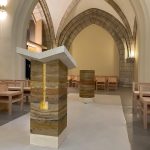 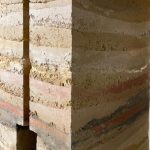 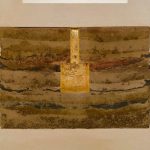 The Church of Aignan

Dialogue between Heaven and Earth

The French city of Orleans is famous for its Gothic cathedral. But just a few minutes’ walk away, on the banks of the Loire, you will find the church of Saint Aignan. It is worth a visit not only because of its historic crypt. Inside the Romanesque church, earth and heaven are combined in the form of an elegantly designed altar, lectern, tabernacle and baptismal font made of rammed earth.

Clay as an origin of creation and form

According to legend, St. Aignan, patron saint of the church, ended the Hun siege of the city with a handful of sand in the first half of the 5th century. The prayers of the then Bishop of Orleans transformed the sand into a swarm of wasps that drove away the attacking forces.

You will also find many passages in the Bible in which earth plays a special role – first and foremost the creation story in which God created man from a lump of clay. The design of the new church furnishings makes reference to this.

Following the designs of the architectural office Cyril BOUCAUD, the wood and earthen clay construction expert Michael Thönnes built the altar, the lectern, the tabernacle and the baptismal font. All were given a base of rammed earth.

Sacred design, connected to the earth

The characteristic layers of rammed earth were used to design the liturgical furnishings. Different colours from dark grey to light beige create liveliness.

A fine shimmer here and there tells you that gold leaf was also incorporated. The altar, tabernacle and lectern are also adorned with a simple, gilded ornament – a square recess with a narrow slit.

The modern church furnishings harmonise perfectly with the Romanesque church building. Unlike the Gothic style, the Romanesque is earthy and massive. Decoration and ornamentation is reduced in comparison. The same applies to the restrained but elegant design of the furniture.

There is another aspect that connects the church and the furnishings: the process of their creation can be seen in both. What is intentional with rammed earth happened to the church building over the course of centuries.

As early as the seventh century, there was a historically significant abbey on the site of today’s church. The abbey church was destroyed in a fire in 999, except for the crypt. The new church was consecrated 20 years later. However, it was repeatedly demolished to prevent enemy military forces from misusing it.

Reconstruction was partly makeshift and left visible traces. Today’s church consists of the former choir with gallery and apses as well as part of the transept. But the building history is constantly being written – as the new church furnishings prove particularly beautifully.

The rammed earth technique is one of the oldest ways of making earthen clay walls. The clay earth is placed in layers in a formwork and compacted. This creates the characteristic horizontal stripes.

Today, rammed earth – as in the Saint Aignan church – is used primarily for design reasons. By adding different clays, the earthen clay layers can be coloured differently and the structure can be brought out.

The production becomes an artistic creative process. Through inserts in the formwork, the surface can additionally be shaped three-dimensionally. Finally, the surface of the rammed earth can be sealed with linseed oil or beeswax.