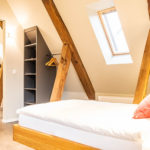 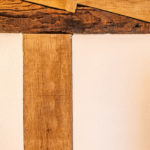 Very few people associate the Ruhr river, which gives the Ruhr Area its name, with relaxation and idyll. But a visit to the Hotel Kötter Farm in Herdecke (Ruhr) will surprise you with the recreational value of the Ruhr reservoirs, the picturesque old town and the way the half-timbered house restored with clay earth fulfills all modern holiday wishes.

Old and new – a combination with satisfaction guaranteed

The Kötter farm was built in the 17th century as a place for day labourers to live and sleep. Therefore accommodation is in the DNA of the house. Since 2020 the historic half-timbered house has been a family hotel with eight “chambers” – two of which are small apartments.

During the renovation, the house was not only restored to its original use, the half-timbered walls were also preserved using historical methods. The wooden framework was filled with earthen-clay blocks, which were made from a straw/clay mixture directly on the construction site.

Inside, the walls were painted with white clay-earth paint. The white of the plastered surfaces creates an exciting contrast to the construction timber, which has taken on a dark colour over the centuries.

Even though the rooms are called “chambers” after their original use as a boarding house, you will find everything here that a modern holidaymaker looks for. The furniture was selected in a simple modern style. Modern art adorns the historical walls. And of course, every room has a comfortable bathroom.

City and history – a new awareness of old substance

The former courtyard is being reawakened with the opening of Kötter Farm hotel along with other projects in the surroundings. New, carefully inserted residential buildings flank the historical house. The Kötter farm is another pearl in the Herdecke townscape, which is characterized by black and white half-timbered houses, often adorned with classic green shutters, typical for this region.

In the Middle Ages, the small town of Herdecke was an important trading hub. This was also expressed through architecture. Many of the historic half-timbered houses built in this period have stood the test of time and have been well preserved. Today the intact old town is highly valued – by both locals and holidaymakers alike.

Water and mountains – a holiday go-to

Locals, and increasingly more tourists, also appreciate the two Ruhr reservoirs located to the south of Herdecke, which attract water sport enthusiasts and walkers. If a walk around the lake is not enough for you, the mountains of the Sauerland to the south beckon – in summer for hiking and in winter for skiing and sledding.

Day trips to the nearby cities of Dortmund and Bochum are also easily accessible from the Kötter farm. The region between the Ruhr area and the Sauerland is certainly not a known holiday destination – and so it remains a real insider tip. For now!

Claytec and half-timbering – rediscovery of an old connection

Before the repair work, the Kötterhof was overgrown by hedges and in poor condition. The old half-timbered walls, therefore, had to be completely restored, whereby the infill was reproduced to mirror the historical materials. Claytec supplied all the necessary products for this: earthen-clay blocks, mortar, plasters and paints as well as willow rods and wooden battens. Some of the building materials were mixed and manufactured directly on the building site, like the straw and clay-earth blocks. The benefits of clay earth make these efforts worth it in a multitude of ways. With its moisture-regulating properties, clay earth is the ideal partner for wood construction. Inside, the building material ensures a healthy room climate and meets today’s requirements for ecologically-friendly architecture.

The Rajasthani House at Mediterana