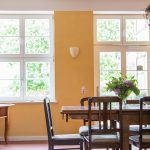 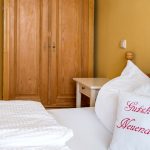 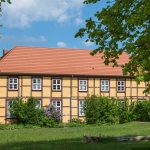 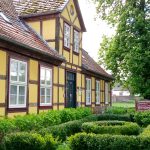 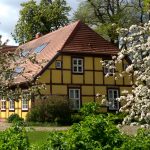 A great example of preserving the historical fabric of a building

The Neuendorf Manor House in the quiet Achterland region on the island of Usedom in Mecklenburg-Western Pomerania is a special kind of historical landmark, if only because the owner Claus-Christoph Ziegler put so much expertise, dedication and passion into its restoration. In 2002, the self-employed landscape architect from Thuringia acquired the former manor by free auction: What he and his planning office team have been recommending to clients for 30 years in the context of building development planning, he also wanted to implement himself – as a good practical example of how the historically significant and endangered building fabric can be preserved and reused economically and in the long-term. „According to an inscription in the chimney, the Old Manor House was probably built in 1820“, Ziegler describes. During his restoration work, he was in close contact with descendants of the Lepel family, in part to also reconstruct the history of the estate. The Lepel family owned the Gnitz peninsula from around 1240 to 1945 and had inhabited the estate for around 700 years over generations.

Since early May 2005, the Old Manor House has been welcoming guests, followed by the New Manor House in July 2015. Vacationers travel from all over Germany to the idyllic location on the peninsula. Turning the old buildings into vacation accommodations with historic charm was the plan for the developer from the start: „The location near the Baltic Sea suits it perfectly.” Nature lovers, in particular, are in good hands amid dunes and heath, salt marshes and forests. The resort itself is also a model in terms of originality. The construction on both the Old and the New Manor Houses was done in keeping with the national guidelines for the preservation of historical buildings. The construction work was also CO2-neutral and consistently ecological.

„It was supposed to be reasonable and make sense from the start”, explains Ziegler, whose estate is regularly recertified by the Mecklenburg-Vorpommern Tourism Association in the context of a family-friendly vacation. „I wanted to create something good, something meaningful, something beautiful that could last. This includes environmentally friendly, regional building materials all around”, says Ziegler. He advises future builders: „Environmental toxins, such as those emitted today from industrial building materials, lead to allergic reactions and numerous illnesses. Before starting construction, it’s important to weigh up whether to build quickly and cheaply and accept damage to health and environment in the process – or to build sustainably, ecologically and as climate-neutrally as possible with diligence and in cooperation with good specialist companies, thus achieving real added value for yourself and the environment.”

Sustainable lifestyle in a cosy ambience

This added value can be felt everywhere at Gut Neuendorf, which uses only electricity from renewable sources, has done away with individually-packaged bathroom toiletries, aluminium foil and microwave ovens. The vacation feeling begins as soon as you enter the grounds and take a look at the quaint buildings: Wooden beams frame smoothly painted friendly yellow walls, the window sashes glow white in the sun, and here and there in front of the glass panes a lilac bush blooms fragrantly. The houses’ colours harmonize with those of the natural world around them. The interiors, plastered with earthen clay, radiate a natural warmth and cosiness. The Old Manor House offers nine apartments for a total of around 40 guests, while the New Manor House has six apartments.

Clay plaster for cosy warmth as from sun rays

In the Old Manor House, owner Claus-Christoph Ziegler, together with specialist craftsmen from Richter – Gesundes Bauen, renewed and repaired around 2,000 meters of timber framing and had all the removed and salvaged clay tiles professionally reinstalled in the compartments. The interior insulation consists of a good 80 cubic meters of clay earth infill mixed with straw and expanded clay for thermal insulation. Water-flow capillary heating surfaces were integrated into this insulation layer and covered in two layers of clay plaster – so that the heat radiates invisibly from the walls. „A feeling like sun rays“, describes Ziegler. „Clay is the best heat accumulator.“ Another advantage: fast drying. „Clay plaster has the very well-developed property of absorbing air moisture and releasing it in doses. To increase the porousness and diffusion capability of the clay surfaces, they were painted with CLAYTEC clay paint. In this way, we ensure a healthy, pleasant indoor climate in the long term.“ In the walls of the New Manor House, CLAYTEC coarse grain primer DIE ROTE, CLAYTEC Topcoat fine with Flax, and CLAYTEC MINERAL 20 were all used.